The other day it was unseasonably cold. We had snow in Tokyo in November for the first time in 50 some years. As it does in Boso, it rained. And it was cold. Only thing to be done was fire up the furnace and toast the toes.

I don't quite have time to write another post just yet, so I'll just link this up from my Instagram.
This little girl is just about perfect. 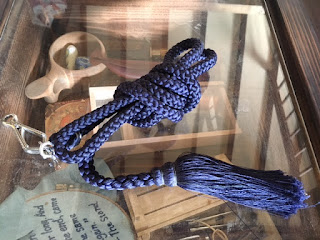 I guess the season started with the arrival of this leash. One day I was told a special package would be arriving from a NIPPO judge in Shikoku, and upon opening it, this leash was sitting there. That night I got a call about it, and was told it was a good luck charm for the upcoming show season which would culminate in the NIPPO Grand National hosted by us, the members of the NIPPO Chiba branch.

This leash has been used by 3 Grand National Shikoku best of breed during their winning show. Now, it's sitting here in my cabin. Don't know that I'll ever have the courage to actually use it...

Anyway, first show of the season was the Chiba regional. I showed my mentor's young male Chouhou Go. 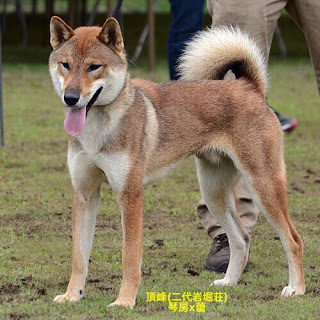 He's a very dry dog, with lots of potential, throwing strongly toward the Choushun type. It was his first show, and first time out of the house, so as you can imagine it was a bit iffy at times, but we took 2nd place in class.

Scheduling and other issues kept me from showing any more dogs the rest of the fall. My only show dog is Masa (Masamine Go), and he was ridiculously late blowing his coat, and didn't eat the whole summer. The females had gone through their heat cycles in the late spring, and everytime one would go in heat, he'd stop eating. Just as I got him to start eating again in the fall, the next round of heats started . It was a struggle to get any weight on him, and to try to get his coat to come in.

I switched up his food a lot, added different toppings when he'd bore of his food, added hot water... encourage his coat to come in by washing him down with cold water every night and leaving him to air dry.

After the summer heat wave came to an end I started taking him out a few times a week off leash in the mountains, where suddenly he started chasing boar. Just when he seemed to be putting on a little mass, and his coat started to come in a bit, I injured my MCL and meniscus while surfing.

It just snowed today in Tokyo, which is ridiculously early, and it's freezing out there. But hey, time to walk the dogs now so I'll write some more tomorrow or the day after...
Posted by Kato at 10:30 PM No comments:

And the Train Rolls On 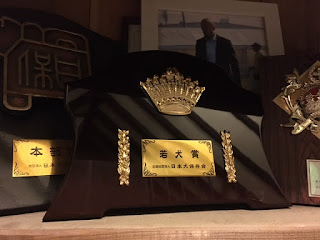 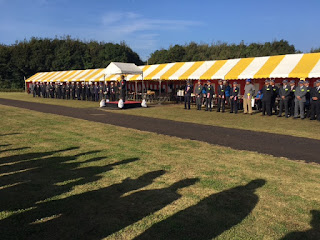 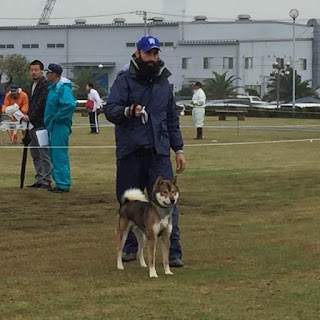 It's been a crazy month with injuries, work, preparation for hosting the NIPPO Grand National, and then of course surviving the show itself. I've come out of it alive, thankful for so many friends, and with another piece of hardware for the shelf. I'll write about it all later this week when I catch up with life. That last picture is of Masamine in the ring with my good friend Mark handling. 2nd place in the Wakainu 2 male class.
Posted by Kato at 9:39 PM No comments:

NIPPO decided at the last board meeting to discontinue the Grand National DVD. It's a shame since I feel it's an important record, however we just don't have the budget for it anymore with falling membership and registrations.


I believe there is still DVD stock of 27 years worth of nationals, but you'd need to contact NIPPO HQ to be sure. It's 4000JPY/dvd for the Japanese version, and 5000JPY/dvd with English subtitles.
Posted by Kato at 11:33 PM No comments:

It's never an easy thing to get a good picture of an animal. Especially one as unpredictable as a puppy. To be honest I get a tinge of annoyance when someone asks for another picture of a pup/dog or 'more recent pictures'. Come to think of it, after I've sent the pup to them, and ask for a picture of how it's maturing, I usually get an out of focus picture of the pup lying on it's back on the sofa with a Christmas ornament lodged between its teeth. 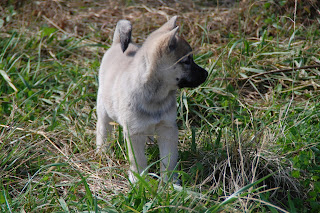 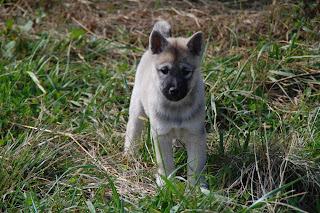 Anyway, I was asked for a picture of one of my Shikoku pups, and after 20 minutes of nothing good, I gave up and took some video. I did get a few nice ones of the Kishu girls that are going to Hakuzan in the US.

If I ever ask you for a picture of a pup I sent you, it's probably because the breeder wants to see how it turned out for future breeding reference. A good head shot, and a shot where structure is visible would be nice!
Posted by Kato at 2:09 PM 2 comments: