The Kishu Ken is one of the six, native, Japanese spitz type dogs. The breed originated in the area known as Kishu (modern day Wakayama and Mie prefectures). Primarily a big game hunting dog, they have traditionally specialized in hunting wild boar and deer. While the Kishu originally included coat colors similar to the other Nihon Ken, due to genetics and breeder preference the majority of Kishu today are white. 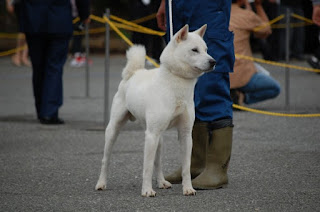 Legend has it that the Kishu are descended from wolves. The story goes that a hunter took pity on an injured wolf he found by the side of the road. All he asked for in return was for the wolf to one day give him one of its pups. The wolf kept its promise, and the pup grew to be a great boar hunter and the forefather of the Kishu. The Kishu is known as a fearless, relentless hunter, and today is still used to hunt deer and wild boar.

The Kishu has also been called the Taichi Ken and Kumano Ken, names taken from areas they originated, but the breed became known as the Kishu Ken when it was declared a Living Natural Monument by the government of Japan in 1934. The Kishu has been treasured by the local hunters for hundreds of years. Local paintings from over 700 years ago depict these dogs hunting wild boar. The Kishu managed to survive the changes the country experienced during and after World War 2, protected by the area’s isolated mountainous terrain, and by the hunters who prized them for their hunting prowess. 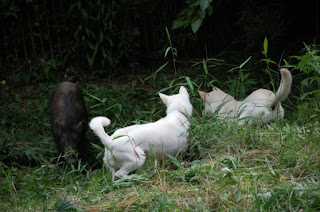 The FCI Kishu standard describes the breed as: “A medium-sized dog, well balanced and muscles well developed. The dog has pricked ears and a curled or sickle tail. The conformation is strong, well boned and compact.” The Kishu once came in many color variations, including ‘buchi’ (spotted or pinto). Today however three colors are recognized: white, red, and sesame. Dogs stand at 49-55cm and bitches at 46-52cm (NIPPO, JKC). The breed has a slightly more muscled, heavy set appearance when compared to the other medium sized Japanese breeds. Like all the Nihon Ken, the Kishu has a double coat made up of coarse outer guard hairs, and thick fine under coat that is shed seasonally. 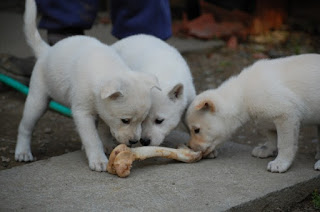 The Kishu is a powerful, athletic, and alert animal. Like most Nihon Ken they are independent thinkers, and have a very strong desire to hunt. A Kishu should be fearless, but not aggressive. They can be territorial and may make good watch dogs, but are not by nature guard dogs or protection dogs. The Kishu as a breed tends to be slightly more approachable by strangers than the other Japanese breeds. They are a rare breed even in their native country with an estimated population of around 10,000-13,000, and yearly registrations of around 300. The main breed registry is run by the Nihon Ken Hozonkai.

There is still limited data available regarding genetic issues within the breed. Some conditions that have been seen in the breed are allergies (with a high instance of severe skin allergies), thyroid issues, and gastro-intestinal issues.