The following chapter is a breakdown of the standard. 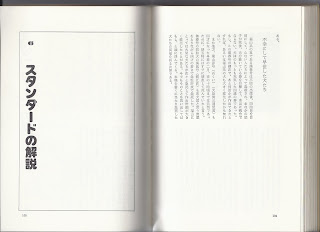 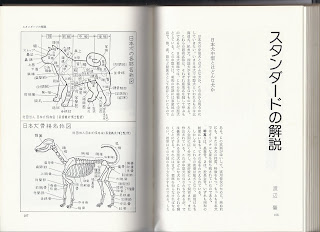 Here the author is using these two pictures to show the correct proportions for the breed. 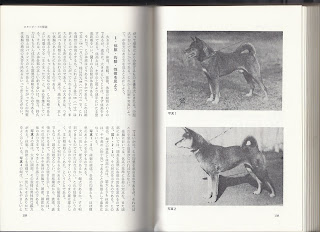 He then uses pictures 3 and 4 to discuss sexual dimorphism which is vital part of the standard for the Japanese breeds. Males should look like males, larger heads, thicker stronger builds, and one should at a glance be able to assume the sex of a dog. Females should look feminine.
The four illustrations are labeling and quantifying proportion, and the text explains things like the need for a straight/level bridgeline on the top of the muzzle. 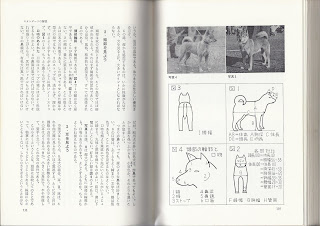 The illustrations on the page below show correct and incorrect stops. This is an issue that many people who are not well versed in the breed tend to miss, especially since a dog with less stop can look more wolflike, which is a trait that draws a lot of people to the Shikoku in the first place. However, Shikoku should have a defined stop. In the three illustrations, the bottom one is described as a correct, natural looking, stop. 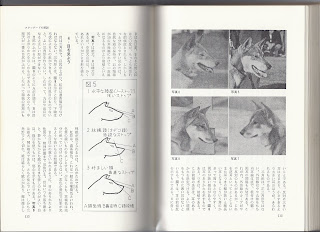 And then here moving into correct angles and shapes for eyes and ears.
Notice the bottom line of the eye points toward the bottom outside corner of the ear. That's the angle you're looking for in Shikoku, no more, no less. Of course this is dependent on the ears being in the correct position. You can also see the shape of the ears, more rounded on the outside, and straighter on the inside. The illustration is slightly exaggerated, but you get the idea. Something seen quite often is gyaku-mimi (opposite ears) where the outside line is straight, and the inside is curved. Naturally this is incorrect. You also want the ears angled forward at the proper angle, not too 'heavy' (pointing too far forward), and not straight up either. The angle they point forward at should line up with the muzzle. Eye color is also discussed, they're not black, just a very dark brown. Light eyes are penalized. 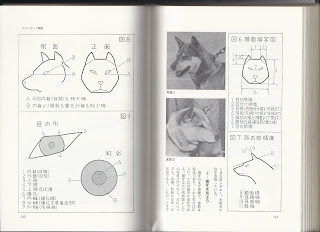 The page below discusses the proper scissor bite, and the middle illustration shows the proper shape for the torso (with the far left being correct). Teeth are discussed, something very important in the Japanese breeds. Missing teeth are penalized heavily (they should have 42!) 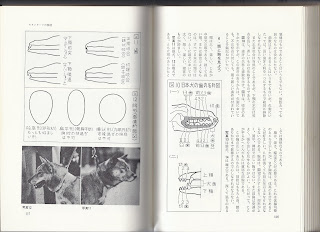 This next page explains the topline (should be straight!) and angulation in the front and back legs. As I've mentioned before regarding angulation in the back legs, vertically the front line from the hock to the foot should line up with the back line of the thigh when the dog is stacked. In the front, the dog should have a chest, which means there is a line from the neck down to the chest, and the legs should not drop straight down from that line. The legs should drop down from behind the chest. 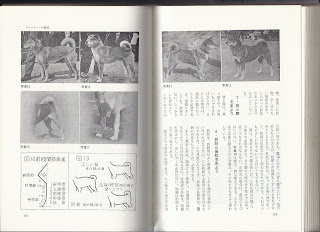 Continuing with the correct angles in the limbs... on the far left is the view from behind the dog, with obviously the top example being correct. No cow hocked or bow legged dogs thank you. Illustration 18 shows correct rear angulation with again the top example being correct. The middle one is too straight, the bottom too angulated which gives the dog's rear a weak appearance. Illustration 16 shows correct angles in the wrist. I see a lot of Shiba with little to no angulation in the wrist, similar to the middle example. This is incorrect. Illustration 15 is another of my pet peeves, again something I see in Shiba a lot is the middle example of an incorrect front. Too wide. In this Shikoku the bottom example of narrow to no chest is a problem I see often. The reason the lack of angulation in the wrist and wide fronts is something I want to clearly point out is because dogs with these traits can look deceptively appealing. When a dog has no wrist angulation and is up on its tip toes, to the untrained eye it can look like it's stacked very nicely. An overly wide and open front can also look like a very strong front if you don't know what you're supposed to be looking for. 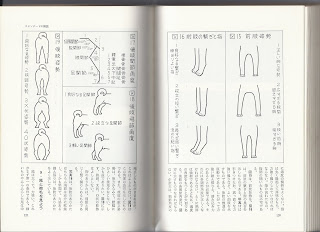 Lastly, and here's another one that people often get wrong, correct tails in the Shikoku (and generally in the Japanese breeds, though tail type is a bit different for Akita, and then there are sickle type tails etc). A correct tail should stand up away from the back, and then curl around in a nice arch, with the curl continuing to the tip of the tail as in the top picture. There should be space in the middle of this curve, between the tail and the back, so that you can actually see through to the other side. We often say there should be enough space to put an egg through it. Incorrect tails that I see alot are tails that drape (the end of the tail does not curl but drops vertically toward the ground), and of course the biggest issue is usually tails that are too tight or are flat on the back. 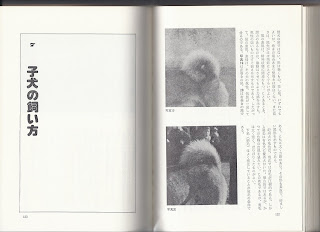 This concludes explanation and discussion of the standard. Why are all these little things important you may ask? Well most of them have their roots in hunting utility. I'll discuss this at some later stage when I have the time, but the longer I've owned and hunted with the Japanese breeds, the more I understand the standard.
Posted by Kato at 11:51 AM No comments:

The 2017 Nihonken Hozonkai (NIPPO) Zenkokuten (national exhibition), often referred to as the Grand National, will take place on November 18th and 19th in Wakayama city. On Saturday the 18th, the medium and large breeds will be shown, and on Sunday the 19th, the Shiba. Here is the address and a link to google maps.

The show was six months ago, but just in case you missed out seeing pictures of the winners from the last NIPPO national show, here they are. 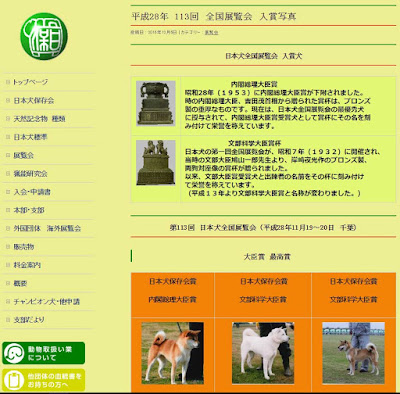 What am I so busy with that I can't keep up with blogging? To be honest I always feel a slight tinge of guilt about not blogging regularly. I'm equal parts busy with the dogs, hunting, traveling, working on the cabin, and helping out with numerous other projects for friends. While this is a bit of joy and not another excuse for not blogging, I've had a lady friend for a while now, and we're either hanging out or surfing a lot. This is one of my many projects that I jumped into with no regard for my schedule. Just found this quirky 4WD base vehicle (a Nissan Rasheen) from 1998 and thought it would be a fun one to tweak a bit. Lady friend needed a vehicle to jump in and out of her place in Tokyo, and without asking if this was okay, I just bought it and started the project. Here's how the original goes. 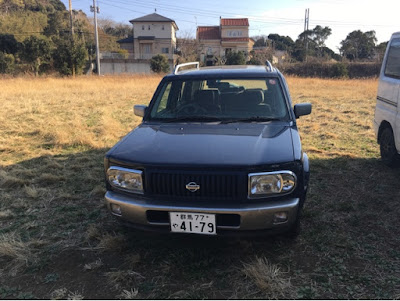 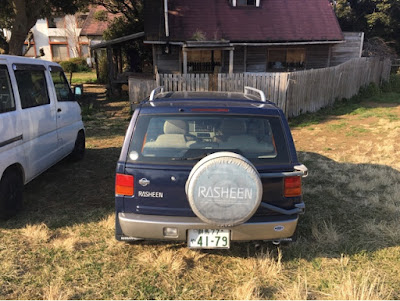 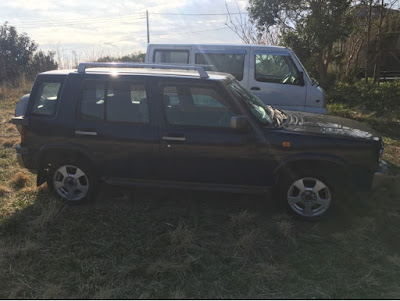 Did a full maintenance overhaul; belts, liquids, tires, wheels. In a past life I worked in a body shop that specialized in Merc's and Volvo's, so body work is not too daunting though it's been over 15 years since I painted a car. I kept it simple this time round and removed/painted the roof rails, front/rear bumper, and grill. There was some putty work involved on the bumpers (and a bit of cheating here and there) but overall I'm quite happy with how it turned out. 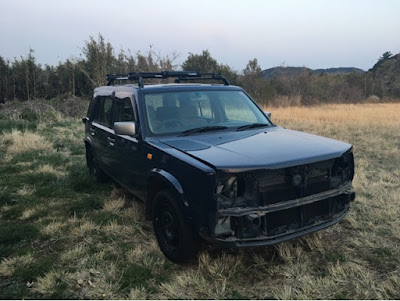 Found a grill that I tweaked a bit to work on this baby, and switch to some retro round headlights as opposed to the ugly stock goggles. 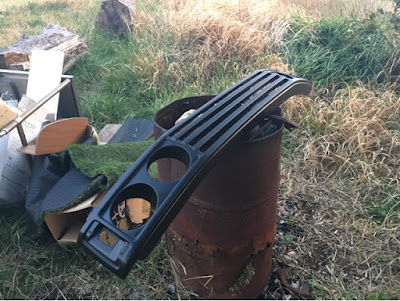 And so she's up and running. I've christened her the kookbox due to her toolbox-like build. At 75,000km and fully maintenanced she should be good to go for a good while. Just threw the longboard on the rack and hit the beach yesterday. All worked out quite well. 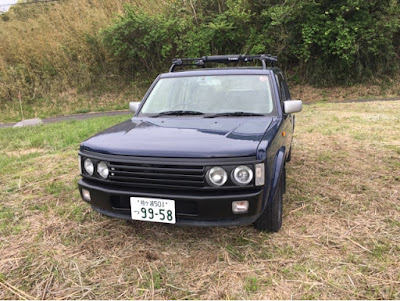 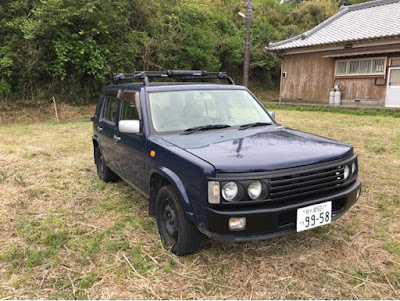 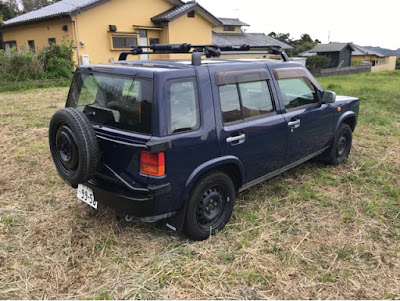 I'm sorry if I haven't answered your emails. I'm busy doing things like this, and traveling. Seattle, Amsterdam, and Morocco have been visited in the past 3 weeks. Getting pretty world class at dealing with jetlag.
Posted by Kato at 11:37 PM No comments: